Are you going to Moscow? Do not miss the opportunity to see one of the most famed theatre groups performing in the prestige Bolshoi Theatre. The ‘Another Russia’ team will tell you about this historical place.

The history of the Bolshoi Theatre

The Bolshoi Theatre is not just a symbol of the Russian capital but a pure national treasure, Pier Urusov and Mihail Medox created the performing group in 1776 (even before the establishment of the theatre). At first, the group was performing on the privately held stages. In 1780, actors began performing in the Petrovsky Theatre. However, in 1805 the theatre burned away, the building was completely ruined. Afterwards, Russian architect Joseph Bove constructed the modern Bolshoi Theatre in the place of the former Petrovsky Theatre. A year before that, Bove had designed a building of the Maly Theatre. The name ‘Bolshoi’ was chosen intentionally, the government likened the theatre to the Maly Theatre (‘maly’ means ‘small’). 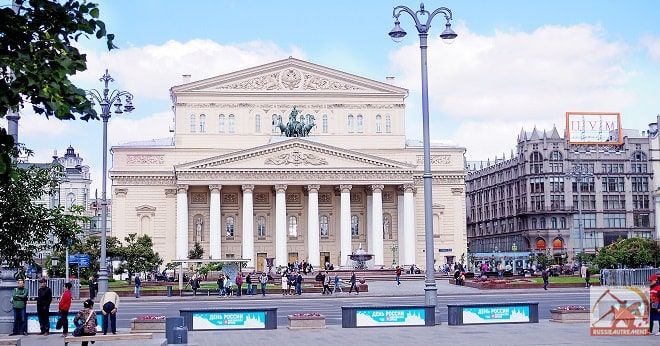 The Theatre opened on 18 January 1925, at first, only Russian musical performances were held there. Only in 1840, the theatre repertoire obtained the foreign compositions.

In the 19th century, the Bolshoi Theatre was on the sidelines of the Mariinsky Theatre. Only after the Russian revolution, the Bolshoi Theatre became the main Russian theatre. In 1921, a new stage was opened, the Beethoven stage. On 1 February 1925, the theater celebrated its first centennium. Despite difficult times, including the Second World War evacuation, the theatre developed its reputation and became the cultural symbol of Russia.

Since 2005, the theatre has been under refurbishment. The opening ceremony of the theatre opening was broadcasted live nationally and internationally on YouTube.

If you were not able to buy tickets to an opera or a ballet of the Bolshoi Theatre, do not feel worry. You may visit the theatre during the tour. It is possible to book a tour on our website as well.

How get to the theatre

The Bolshoi Theatre is located in the heart of the city, within walking distance of the Kremlin and Red Square. To get to the address located at The Theatre Square 1, you should take the subway and disembark at the Teatralnaya station (green line). ‘AR’ invites you to get acquainted with Moscow during the city tour. Please use the link for more information about Moscow tours.